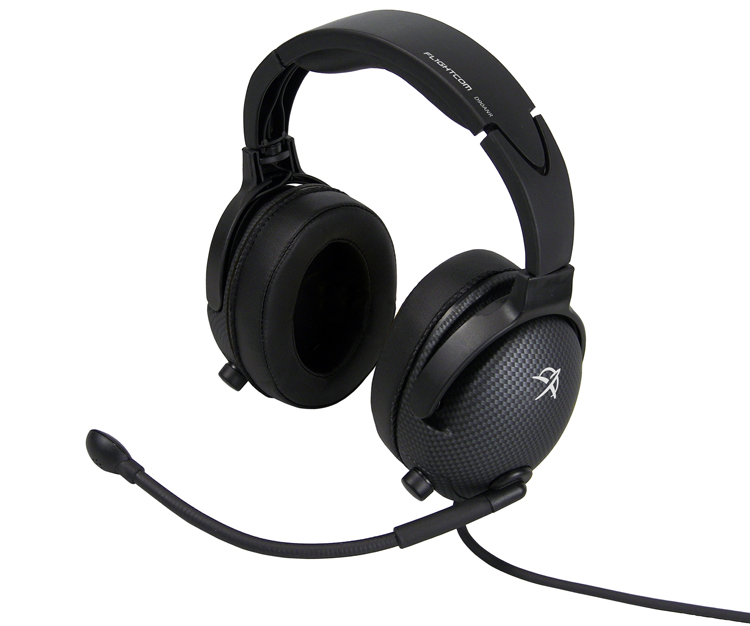 Flightcom, a manufacturer long known for their headset and communications products for airport ground crews, has recently upgraded their lineup of GA headsets with the “Denali” model. Targeted at the low cost section of the market with pricing ranging between $250-$430, these headsets seem poised to provide good value for pilots just getting into aviation. In this review, we take a look at the Flightcom Denali D90 model, which provides passive noise reduction for a very low price.

The Denali D90 is the flagship model of the Denali lineup, and offers a more standard set of features we are used to seeing on most headsets: The controller box for the Denali D90 is nice and compact and includes an aux port!

The Flightcom Denali D90 builds on the features offered by the Denali D50 by adding an auxiliary music input jack and a different controller box style which accepts AA batteries instead of a 9V battery. Like the Denali D50, it has a very basic, lightweight plastic construction. The headset feels sturdy when holding it, though it probably would not survive a ton of abuse being made primarily of plastic. The ANR controller improves upon the D50 by using AA batteries, which give it a 50 hour battery life – twice as long as the D50.

I personally found all of the Flightcom Denali models to be extremely comfortable, and the Denali D90 was no exception. The earcups are extremely soft with a lot of foam padding – so much so that I worry for their durability. Fortunately, they are replaceable at $42 for a pair. As mentioned, the headset is also very light on the head – a “feature” that is often overlooked. The headset is adjustable via a plastic rail that expands or contracts on each side. Some owners of Denali’s have complained that attempting to tighten this rail once the Denali is on your head causes the earcups to pull away, creating an imperfect seal.

The microphone is of fairly basic construction. A muff is included with the headset. Users have complained of the mic boom coming lose and falling away from the mouth during flight.

The headset is not TSO certified and should not be used for commercial flying.

We were not impressed with the noise reduction afforded by the ANR in the Denali D90. While it did reduce cabin noise somewhat, it is nowhere near the reduction you see with competitor headsets from all the other major manufacturers. Fortunately, this headset is nearly identical to the Denali D30 and thus offers excellent passive noise reduction.

We were not huge fans of the Denali D50 headset and nor are we fans of the Denali D90. We think the Denali D50 might have been more of a consideration if it had the aux port at its price point – we definitely don’t think it justifies an extra $110 though! If you are looking for a cheap headset, ANR or not, we recommend you look elsewhere. Check out our listing of other ANR headsets for some ideas.